There are plenty of opportunities in Warlords of Draenor for those who are looking for some new adventures. With four new level-up dungeons and four maximum level dungeons you’re on the fast track to danger, mayhem, and perhaps a bit of shiny new loot.

There’s so much packed into Warlords of Draenor that we’d be remiss if we didn’t take a moment to look at the upcoming dungeons.

Some like it hot and others are simply slaves within it. This level 90-92 dungeon takes you into the sweltering heat of active volcanic caverns wherein Bloodmaul ogres run a brutal mining operation powered by the blood and sweat of slaves acquisitioned from all across Draenor. The Slag Mines produce a bounty of gemstones and ore, but it’s rumored that the true purpose of these mines is to dig for an ancient relic of immense power.

You’ll encounter four new bosses and a lot of fire power as you try to disrupt their machinations. We’re sure you’ve learned that ancient relics in the hands of – well anyone– are probably not going to lead to very good things. You know what to do, heroes.

On the art of minecraft: "The beginning and ending of Bloodmaul Slag Mines were my favorite shots to establish in the dungeon," says Senior 3D artist Andy Matthews. "You get a sense of how precarious and dangerous every element of the mines will be.  We used old wood and rope, not the best materials to use inside a mine that’s filled with lava and fire.  Ogres don't care; they will just grab more and haphazardly place a new one on top of the half burnt one.  Not the brightest but they will ’get the job done.’

The ‘look and feel’ of the Mine was inspired by Bladespire Citadel and the surrounding Ogre settlements in the zone. In the Slave Quarters you will notice each hut shows the daily life of living inside an active volcano. Some huts are better off than others."

"One slave in the dungeon turns a mysterious wheel of pain but why?" 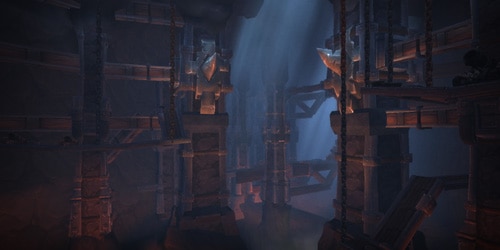 Battles can be won and lost by the power of a naval force. To put a stop to the Iron Horde’s naval powerhouse, you’ll need to venture into this level 92-94 dungeon. This port located in the northern coast of Gorgrond houses the Iron Horde’s shipyard, filled with massive warships and artillery forged and assembled within the Blackrock Foundry. In addition to this seafaring arsenal, elite infantry units are joined by trained beasts to comprise the ground troops.

You’ll encounter four new bosses who you’ll need to put a stop to before their ship has sailed. Beware the Cannon Barrage and the Backdraft. This is one shipyard that’s bound to get explosive.

On the shipyard’s origin: "The Iron Docks started off as a PVE quest area," says Senior Artist Steve Crow, "but then once it started to take shape we realized it would make a great backdrop and play space for a dungeon. This has given the dungeon a unique visual look that is quite unlike any other dungeon in World of Warcraft. It’s also a great showcase of all the Iron Horde technology and architecture culminating in a showdown with the final boss within the dungeon which takes place on a huge Iron Horde ship."

"We really tried to give the Iron Docks a sense of being overwhelmed," adds 3D Artist Patrick Burke. "This is an important strategical location for the Iron Horde to send out their destructive forces.  The architecture is threatening and is meant to show that the Iron Horde means business. The Iron Horde has no concern for the environment or cleanliness.  The sky is filled with smog.  The ground is littered with oil stains, streaks, and all manner of machinery." 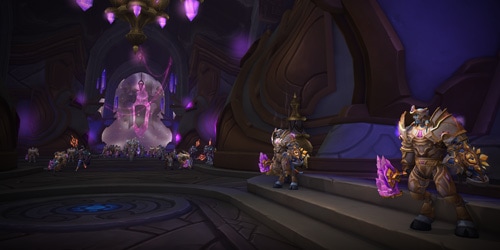 Auchindoun is the holy mausoleum of the draenei, a sanctum of the Light in which the spirits of the dead find respite.  It’s also a level 94-97 dungeon found within Talador. The crystalline structure serves to protect and shield draenei souls from their eternal enemies: the Burning Legion, who hunger for draenei spirits. For the Shadow Council, this holy place is an opportunity ripe for the picking, as Gul’dan and his minions work to gain favor with their demonic masters.

You’ll encounter four new bosses with multiple shades of abilities and one of whom may seem just the tiniest bit familiar.

A place of contemplation: "Our intention for Auchindoun was to give it a cathedral like vibe," says Senior 3D Artist Jonathan Jacobson. "As a mausoleum the hallways and chambers needed to enhance the deep respect and admiration for the heroes that have made Auchindoun their final resting place.  It also evokes a certain ethereal quality; the light has a certain glow and opulence as it hits the water and golden surfaces within." 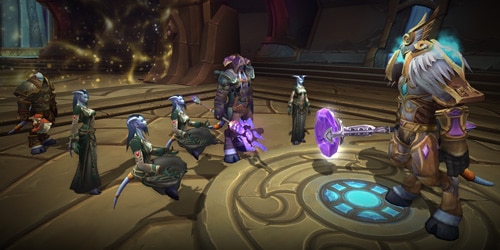 Last of the four level-up dungeons, this level 97-99 dungeon sits high atop the Spires of Arak amid the clouds.  This dungeon holds the seat of power of the Adherents of Rukhmar, high arakkoa who have gathered and harnessed the Apexis technology of their forebears. Now they’re ready to unleash the focused power of the sun upon their enemies. If you want to stop them from unleashing this power, you’re going to have to face your acrophobia, wipe the sweat from your palms, and take the battle directly into their lair.

You’ll encounter four new bosses within this lair and we highly advise staying away from the beams of bright shiny light.

Reach for the sky: "The Spires of Arak Dungeon allowed us an opportunity to explore and fill out the culture of the arakkoa" say 3D Artist Fanny Vergne and Senior Artist Steve Crow.  "In the Burning Crusade we only showed some of the remnants of this ancient race, so we essentially had a few puzzle pieces with which to build upon.  This is the first time you’ll see the arakkoa in their homeland.   The dungeon has a few themes that run throughout the culture, the feeling of height, a sense of grandeur, as well as intricate "bird-like" accents."

This level 100 dungeon is located within Shadowmoon Valley. The traditional burial grounds of the Shadowmoon clan are the final resting place for countless of generations of ancestors. All is not as it should be however and Ner’zhul has sacrificed more than his clan can afford as a part of his desperate quest for power. Now the ancestral spirits are restless, tormented and used to fuel dark rituals that will pull all of Draenor into the void if allowed to run their course.

You’ll encounter four new bosses including Shadowmoon chieftain Ner’zhul himself. It’s up to you to put a stop to the chaos he’s set in motion.

On shadows and symbols: "The moon sigil effect done for the Sadana Bloodfury boss fight tells the story of the Shadowmoon clan and their connection to the dark arts," says Associate 3D Artist Jessica Dinh. "Their complicated rituals are mirrored in the intricacy of the chart, as well as by the ominous carvings that riddle the walls throughout the dungeon.

The huge, moss-covered stone blocks give the dungeon a dank and ancient vibe, which becomes even more pronounced in the Bonemaw Caverns portion of the dungeon.  Towering monuments can be seen crumbling in the foggy distance as the player progresses through the watery graveyard of souls." 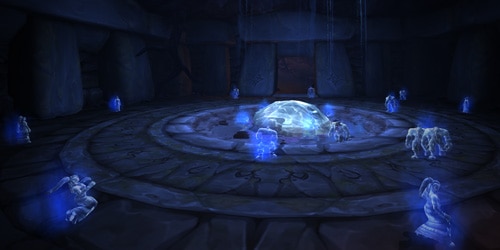 Plants – they seem so harmless until they try to kill you. This level 100 dungeon is located in Gorgrond, within the very heart of the deadliest forests in Draenor. After the disruption of the Dark Portal, the Kirin Tor, in a bid to establish a supply line to fight the Iron Horde on their own soil, have set up outposts across Draenor with magical links back to Azeroth. Unfortunately, what seemed like a prime strategic location near the Blackrock Foundry is a sacred place to the botani. The outpost was quickly overgrown, but still contains a link to the outskirts of Stormwind…

We’re sure it will all be fine though. What’s the worst that could happen?

You’ll encounter five new bosses all of whom have the power of nature in their hands –literally.

On nature’s deceptive nature: "The botani trees for the Everbloom dungeon were designed to look ‘claimed’, overtaken, and manipulated by the Primals race to suit their needs," says Associate 3D Artist Jessica Dinh. "The vines and branches shape themselves in a wild, yet purposeful fashion, lending the dungeon a vibrant, sentient atmosphere. The beauty of the botani trees is quite deceiving, and we wanted to distinguish their colors from the other trees in the area."

If you’ve ever wanted to enjoy the sights of Draenor by train, then this isn’t the ride for you. If you want fast paced action on a moving train, then we’ve got you covered. The Grimrail Depot is a level 100 dungeon and a vital hub in the Iron Horde war machine. Allowing for the transport of troops and materials produced in the Blackrock Foundry to the front lines of the war being waged across Draenor, the Depot’s namesake is the Grimrail itself. This massive train can bear entire battalions of troops and artillery. Fitted with a massive railgun powerful enough to shatter the shield protecting Shattrath, the train is about to depart. Do you have your boarding pass? It’s going to be a heck of a ride.

You’ll encounter three new explosive bosses who are packing some serious gadgets and fire power. This train isn’t stopping for anything or anyone.

On engineering exhilaration: In creating the architecture for Grimrail Depot, 3D Artist Ryan Cooper says that one of the goals was to make sure the player could see the world speeding by them as they encountered all manner of obstacles and precarious paths, creating a feeling that you fall off at any time. They designed the train interiors to feel cramped and full of precarious objects that could crush you at any given time. Later, as the action shifts to the Depot, players are taken above the station and into the rafters to give a unique perspective and a sense of the Depot’s enormous scale and a unique perspective—something you wouldn’t necessarily get from just fighting alongside the train on a platform.

This is a mountain that is rife with history. Heroes of Azeroth have long fought and bled through its halls, but now this imposing fortress is under new management. This level 100 dungeon in the upper reaches of Blackrock Spire is now home to the Ironmarch vanguard. As preparations to use the Spire as the staging ground for a full-scale invasion of Azeroth continue, the Iron Horde has set up a terrifying contingency plan: a doomsday weapon within the heart of the Blackrock Mountain.

You’ll encounter five new bosses at level 100 and can experience the first three as a part of the pre-expansion version of the dungeon available to level 90 players for a limited time.